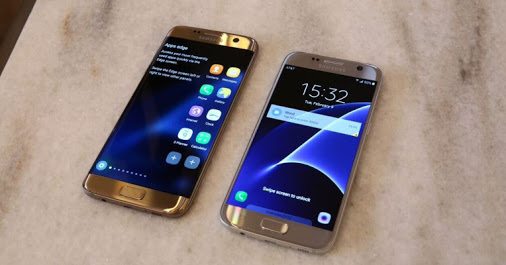 Samsung Brings Back Expandable Memory, Water Resistance To Galaxy Line With The S7 And S7 EdgeThe Samsung Galaxy S7 and S7 edge share almost identical specs, but they no longer share the same 5.1 inch screen size as the S6 models. Though the S7 edge has kept the same Quad HD resolution, its curved screen real estate has expanded from 5.1 to 5.5 inches. That larger screen will receive some increased utility via the new Tasks edge screen which will give users quicker access to apps, news and various other functions with a swipe from the edge.

If both of the new phones appear to be bulging at the waistline a bit more than the previous generation, it’s likely because Samsung has significantly upgraded battery capacity in both devices. The S7 battery will grow to 3,000mAh from 2,550mAh while the S7 edge (notedly now powering a much larger screen) will see capacity increase to 3,600mAh from 2,600mAh.

These battery capacity upgrades have left both devices a bit chunkier. At 7.9mm and 152 grams, the S7 is 1.1mm thicker and 14 grams heavier than the S6. The added heft is much more noticeable on the S7 edge, which has blown up in nearly every direction due to the new 5.5 inch screen. The S7 edge is almost 20% heavier than the S6 edge at 157 grams.

Last year’s launch of the S6 line offered up a few disappointments to hardcore Galaxy fanboys who saw the loss of water resistance, a removable battery and the microSD slot as the iPhonification of a brand they loved.

Though user-replaceable batteries have likely sung their swan song for the Galaxy hardware, Samsung is bringing the microSD slot and water resistance back from the dead to both the S7 and S7 edge. Both phones come with 32GB of onboard memory but can support up to an additional 200GB of storage via the dual-SIM microSD slot. The water resistance on the S7 and S7 edge is now IP68 certification, meaning the devices are “protected from long term immersion up to a specified pressure.”

Switch to our mobile site